90 degrees, bright sunshine, no rain in the forecast and a light wind; perfect conditions for a firsthand look at roof repair.   Last winter I sat in on a training session with Vanberg Specialized Coatings when they covered the basics on their exterior metal coating product, AMC-100L or Aluminum Moisture Cure Urethane.  The results in the training labs were impressive, and I wanted to get some field experience using the product. 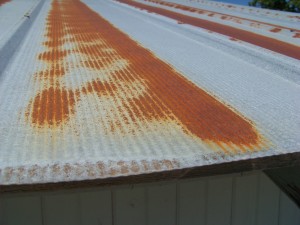 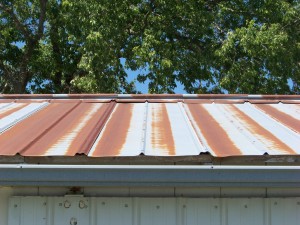 The site chosen was not a livestock building, but a storage building erected in 1968.  The 44 year old galvanized roofing was structurally sound but was starting to show large areas of surface rust.   I greeted Jim and Steve from Vanberg Coating, and we started on the process. 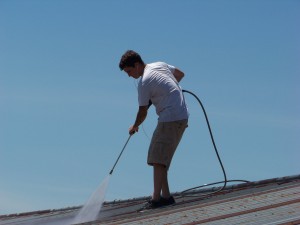 First they sprayed the roof down with a power washer to remove any dirt, bird droppings or loose rust.  Any areas with heavy rust were hit with a wire brush and loose nails were hammered down.  Once the roof was dry, we moved on to the next step. 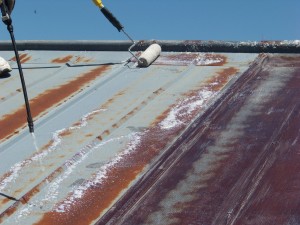 The second step of the process was to apply VSC Rust Converter to the rusty spots.  Rust Converter chemically changes rust to a stable, insert compound.  Jim poured the Rust Converter into a pump sprayer and applied it to the rust spots that Phillip rolled out behind him.  Steve finished the process by sweeping the semi-dried surface lightly with a broom to smooth out any bubbles. 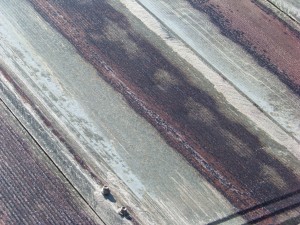 The results were a little surprising.  In the training demos, the samples that we applied the Rust Converter turned almost immediately jet black.  On this roof, the color was more of a dark red with black edges. The areas with light rust colored up dark red and only the heavy rust areas that penetrated to the carbon metal below showed up as black. 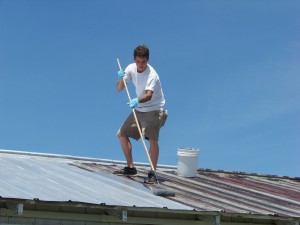 Day two was a carbon copy of the first day only with a little more wind that steadily got stronger as the morning progressed.  The original plan called for applying the AMC-100L with an airless applicator, but Steve and Jim decided there would be too much over spray with the existing breeze.  So instead we applied paint with rollers and paint brushes.  With me straddling the ridgeline and painting it with a brush, Jim and Steve rolling out the slopes, we moved right along.  While I would suggest using an airless applicator for a project this size, the fact we rolled this on by hand does prove the versatility of the product.  The AMC-100L dried quickly into a BRIGHT silver colored surface.  You could feel the heat reflecting off the roof so I would think the attic would also stay somewhat cooler.

Probably no place is as tough on metal roofs as when they are used on poultry and livestock buildings.  AMC-100L is great option for repairing rusty roof areas before they have to be replaced.  AMC-100L also works great to repair rust spots on feed bins.  You can try AMC-100L in a kit by ordering on line from our web-store at http://www.hogslat.com/vanberg-coatings-amc100l-metal-repair-kit or by going to any Hog Slat and Georgia Poultry stores near you. They carry a full line of Vanberg Specialized Coatings metal and concrete repair products in stock. 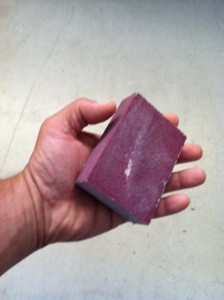 You will probably be surprised at the consistency of AMC-100L; as you’ll be expecting a thick, heavy product like latex paint.  In fact, it’s actually more of a thin, watery stuff.  I didn’t wear gloves when applying the AMC-100L because it was a hot day and I planned on washing it off when we were finished.

Bad idea. Nothing would take it off my hands and arms.

Not even finger nail polish remover.

I ended up taking an 80 grit foam sanding block and literally sanding it off my hands!

So beware and wear gloves and long sleeves.  This is tough stuff!