Steel corrosion, commonly referred to as rust, is an oxidization process occurring when iron in steel is exposed to oxygen and water. Rust causes steel to thin over time, reducing its strength and causing product failure.

Any coating, which provides a barrier to moisture and oxygen, protects steel from corrosion. A painted surface provides an effective barrier until it is broken allowing moisture and oxygen to come in contact with the steel beneath. Rust develops at the breakage point and can even extend under the protective paint barrier.

Similar to paint, a galvanized coating forms a protective barrier to protect steel from moisture and oxygen. Galvanized coatings also provide a second method of protecting steel by electrochemically "sacrificing" the zinc in the present of corrosive elements.   In other words, the zinc corrodes, until it is depleted, instead of the metal underneath. Because it is physically bonded to the metal, galvanized coating does not allow rust to extend beneath its surface. 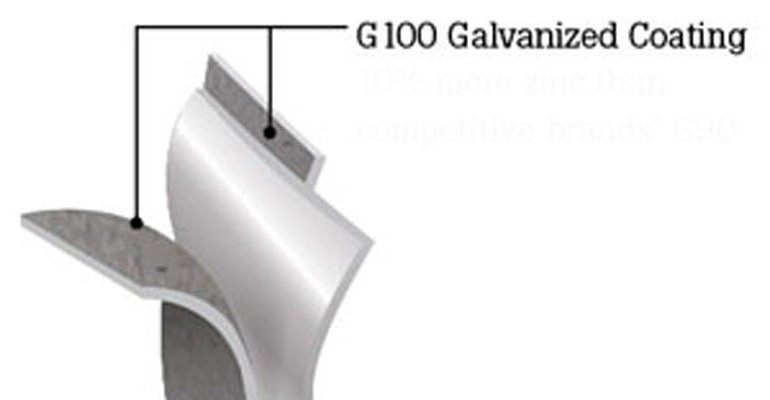 Galvanized coatings are expressed in ounces per square ft with conventional coatings designated as G30, G40, G60, and G90. These refer to thickness of .30, .40, .60 and 90 oz./ft2, respectively. Corrosion resistance is directly proportionate to the amount of zinc coating on the steel. Therefore we would expect the service life of G90 steel to be roughly three times that of G30 in the same environment. Likewise, increasing the galvanized coating on a feed bin from G90 to G100 increases the bin's service life by 10%.

Galvanized steel is an excellent choice for use in feed bin fabrication, as it does not degrade when exposed to the sun's ultraviolet rays like painted coatings or poly bins.

In addition to heavier galvanized coatings, Hog Slat bins are manufactured from stronger Grade 55 steel, come with an improved ladder design and water deflecting Weather Edge™. Every bin is backed by an extended 5-year warranty. To see more go to Bulk Feed Bins.