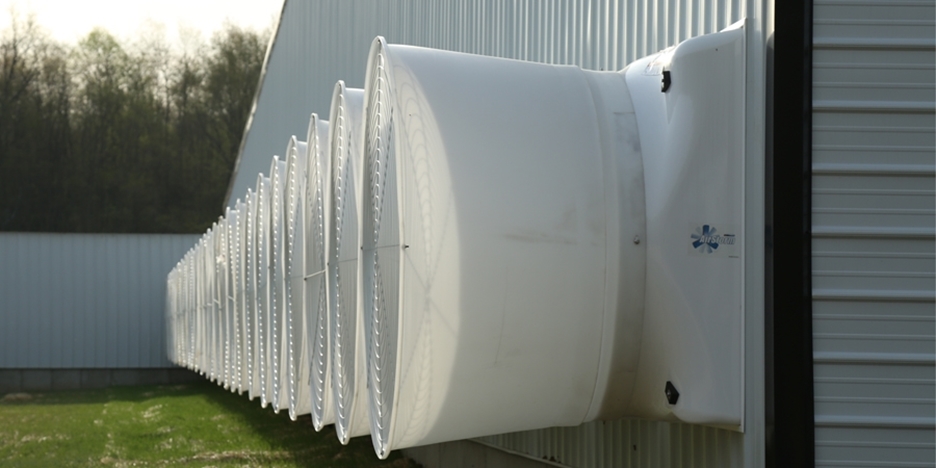 Take a look at any fan performance chart, and you'll notice adding a discharge cone to a fan increases its performance.  While almost everyone accepts this as fact, most of us don't know why it improves performance.

The reason is air disturbance.

The fast-moving air exiting the fan pushes against the static air outside the fan housing, causing it to swirl.   The swirling air creates a disturbance at the blade tips, which effectively reduces the diameter of the fan causing it to move less air.  Adding a discharge cone directs the exiting air along the cone wall, preventing it from being disrupted by the outside air, and allowing it to flow smoothly out the cone.

Also, using a bell-shaped discharge cone, instead of a straight-wall design, permits the exiting air to expand.   The air expansion reduces the backpressure against the fan, allowing for increased air movement.

Numerous references have established 7-degree slope as the most effective cone angle.  Wider cone angles allow the airflow to separate from the cone walls resulting in the formation of turbulence.   The standard length for a discharge cone is between one to one and a half times the diameter of the fan.  While there is some performance increase by lengthening the cone, this subjects the cones to increased damage from snow or high winds.

There has been some question on the benefits of adding cones to fans located inside facilities designed with positive pressure systems.  The same performance increase occurs if the fans operate in a positive or negative system.

When selecting smaller fans for winter ventilation, adding a cone is not the best choice.  Instead, add a wind diverter to protect the fan from strong winds that decrease its delivery.

One downside to using discharge cones is increased maintenance from weather damage.  It is not uncommon to see sections missing from multi-piece cones after heavy snowfall or strong winds.  The missing parts will decrease the benefits of using a cone.

When installing fans with cones, be sure and allow for the increased center spacing. The flair of the cone doesn’t permit the fans to be mounted as close together.  Also, be aware of the extra bracing required on a building end wall when installing a bank of tunnel fans.  Ice and snow can build up on the cones putting additional stress on the end wall.  Consult your building contractor for details.