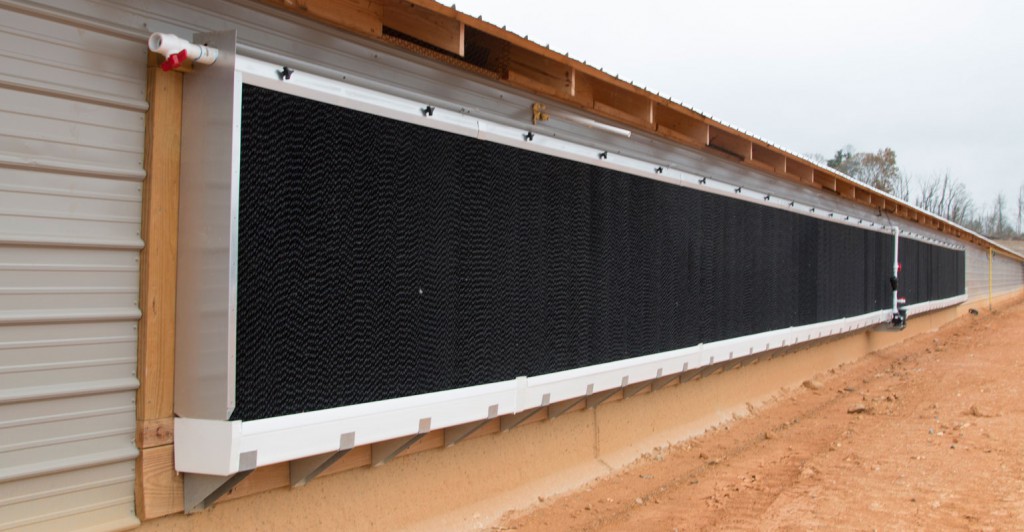 "When it comes to evaporative cooling most of the equipment problems we see are failures to do routine maintenance," explained Tyler Marion, an engineer with Hog Slat Inc. located in Newton Grove, NC. "Evaporative cooling is really a pretty simple concept, but you have to perform basic maintenance tasks to keep the system operating correctly."

Flush, Don't Bleed
A standard industry practice involves "bleeding-off" a percentage of the recirculation water to prevent a buildup of scale on the pads. Scale is the mineral deposit left on the pad when the water evaporates. While bleeding-off is better than nothing, a much better practice is to dump all the water from the trough and replenish with fresh water that in turn helps to flush the containments out of the cool cell pads. How often the trough needs to be drained depends on the hardness of the water and how often the evaporative system operates. Monitoring the PH level is a useful method to determine when to change the water with readings above 8.5 indicating an excessive mineral buildup. 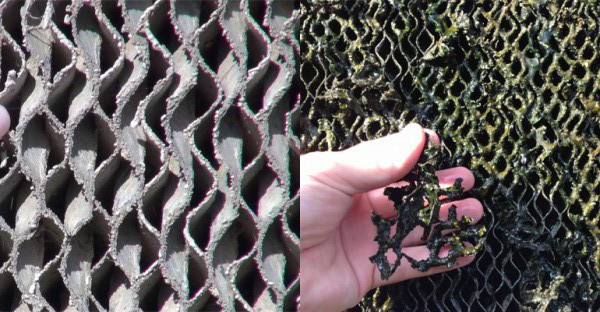 Use Preventive Chemical Treatments.
Paired with frequent water flushing, adding descalers and microbicides to the recirculating water pays big dividends in extending pad life. Descalers help keep minerals in suspension for more efficient flushing while microbicides reduce the growth and buildup of algae, bacterial and fungal slimes on the pads.   Never use chlorine bleaches to kill algae. Chlorine attacks the glue in the pads causing delamination. 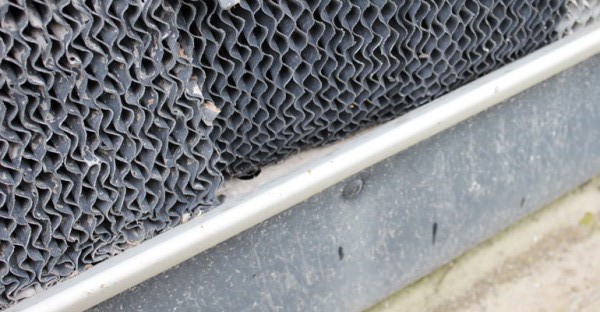 Adjust the Float.
One of the most common reasons for premature failure occurs when water logged pad bottoms become soft and sag down.   Just because water doesn't spill out of the trough when the system shuts down doesn't mean the float is adjusted correctly. When properly set the water level should be 1" below the bottom of the pads. It is critical to check the water level in new installations after running the system for several days.

Be on the lookout for trough levelness to change as the building settles and the framing shifts. Also, as the pads age, they retain more water making float valve adjustments necessary.

Clean the Trash Out
Trash and debris in the pump trap and water line filters reduce the amount of water circulating through the system. A telltale sign of reduced water flow is dry or streaked pads at the end opposite of the pump. Failing to remove debris from the trash basket on a jet pump also reduces its useful life. Clean the holes in the distribution pipe whenever dry streaks appear on the pad. Open the ball valve on distribution pipe opposite the pump end and run the system to flush out any gunk from inside the pipe at least once a month.

Winterize the System.
Shutting off the water supply and draining the system are the basics for preparing an evaporative system for winter. In addition, remove the pump from the system and move it to inside storage. Just disconnecting the plumbing fittings and leaving the pump in place leads to damaged impellers and cracked housings.