How Complicated Does Feeding a Sow Need to Be?

Ever notice how some people or companies try to make a job more difficult than it has to be?

Today I read an article about a show case farm with an  integrated computer system including electronic sow feeding.  There is a picture showing a hand held computer programming in the amount of feed that a sow will receive according to its body condition score.

Looks like a complicated and expensive system that isn’t any more effective than hand feeding.  If the computer based delivery system puts more feed in front of the sow than she can eat then it spoils and if the system puts in too little she doesn’t get the nutrients she needs for full milk production. 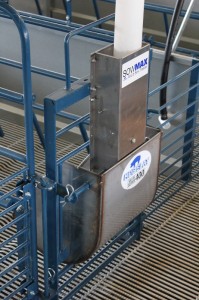 Compare this to feeding with a SowMAX.

You fill the hopper.  The sow activates the lever and eats as much or as little as she wants….whenever she wants……night or day.

No guess work.  No wasted feed.  No under fed animals.

In the same e-mag there was also an advertisement describing an ad lib sow feeder that looked a lot like the SowMAX.  One crucial difference though, it described the product as having a “timer that dispenses food at desired intervals over a 24 hour period”

Who’s desired time, yours or the sow’s?   Why would you use a timer and motor instead of a lever?   Most importantly this feeding dispenser still requires the operator to make a decision on the amount of feed that is metered out in 24 hours.

Again, same story. Feed too much and you’ll get spoilage or feed too little and the sows produce less milk.   The SowMAX system lets the sow make the decision instead of a human operator.

SowMAX is the best Ad Lib Feeder on the market today.