"SowMAX is just like having a bunch of mini feed bins!"

I recently caught up with Mark Daughtry of Prestage Farms in North Carolina to discuss his experience with SowMax farrowing ad lib feeders.  Mark is the Sow Production Manager in North Carolina and oversees about 55,000 sows.  He quickly corrected my terminology regarding the SowMAX. 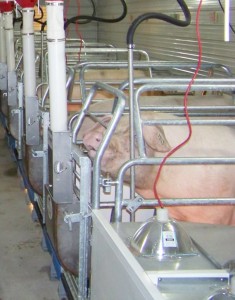 “First of all…” Mark said, “the SowMAX is not a sow feeder.  It’s a feed storage device that delivers feed to the sow on demand. It’s like having a bunch of MINI FEED BINS sitting above the feeders ready to deliver fresh feed on demand.

“I’m not sure exactly what you mean.”

Look I’ve been working with sow herds for 24 years in one way or another. The BIGGEST challenge I’ve faced in that time has been training farrowing house personnel to feed lactating sows.  It is extremely difficult to feed sows correctly by hand.

Sows are individuals and depending on their genetic makeup some sows are capable of eating much more feed on a daily basis than the group.  If you were to look at daily feed intake per sow, you would see a normal bell curve.  The bulk of sows will eat somewhere between 18-22 pounds per day, but some of those gals will eat as high as 30 pounds a day! Those are the sows that normally don’t get fed correctly with hand feeding.

If we decide that 20 Lbs is all we will ever feed any sow, then those high appetite sows are going to get short changed.  Those are the sows that will typically wean desirable large litters of heavy pigs.

I like to think of today sows as being like high performance race cars.  If we don’t fuel up a race car, it will not run.  Same with sows, they are capable of high performance as far as producing large numbers of pigs, but we have to get the feed/fuel in them.

How does that change with SowMAX?

SowMAX allows us to feed sows to full appetite without guess work.  Our feeding regiment in farrowing goes like this:

For three days prior to farrowing we feed four pounds of feed through the SowMAX.  We instruct the farrowing personnel to place two pounds, twice a day in the SowMAX hopper.  This gets them up each time and gets them accustomed to activating the trigger lever on the SowMAX.

After farrowing, we continue to hand feed for two more days.  On day three, we fill them up and monitor feed disappearance.

Feed disappearance? What does that mean?

Simply put it means that we fill the SowMAX up twice a day and look the amount feed that is gone in the hopper.  As long as the sow is eating over half of that amount we just fill it up again and go on.  We are only concerned with the sows that aren’t eating; that’s the one that’s having trouble and needs our attention.

“You know Mark, feed is very expensive; what about a producer’s concern that SowMAX may be getting more feed into the sows but that it’s also wasting more feed?”

Our experience has shown the exact opposite.  We waste less feed with SowMAX than hand feeding, and that’s easy to figure out.  With hand feeding if you guess wrong and put more feed in the feeders than she can eat, it spoils and you end up dumping it out.  The SowMAX delivers fresh feed to the feeders….on demand….whenever a sow is ready to eat.   Human judgment is eliminated….we don’t have to try and outguess mother nature. Again, we have those MINI FEED BINS sitting there ready to deliver feed whenever she’s ready to eat.

Do you have farms with other types of systems?

Yes, we have automatic systems where feed is dumped from drops into the feeders several times a day.  There is less physical labor but it really isn’t any better than hand feeding.  You still have to guess on the amount of feed each sow will consume each day.  Plus, as the systems get older they take more maintenance; it seems like we are always fixing a switch or replacing a motor. SowMAX works everyday; no timers, no motors, no switches, nothing to wear out.

With SowMAX, we fill the hopper, and we have some flexibility if something goes wrong.  In a dire emergency, we still have almost a day’s worth of feed storage at each hopper.  We have other systems that use a plastic tube and have almost no storage.  We have a lot more cushion with SowMAX than the other systems.

So with SowMAX, you are able to “fuel up the race cars” What differences do you see in performance?

First, there are only two things that make milk, feed and water.  A sow produces more milk per body weight than a milk cow.  Can you image a dairyman limit feeding a milk cow?  That would never happen, yet we expect a sow to produce to her full genetic potential on limit feeding!  SowMAX allows us to fully feed sows according to their individual appetite and they produce heavier litters.

Second, we quit condition scoring sows coming out of the farrowing crates that are using SowMAX.  Rarely would we have a Two score, they consistently scored as Threes. Because of their better body condition rebreeding is improved.

We have SowMAX in about 5,000 crates in North Carolina.  You can bet that any updates or remodels that we do in the future will include SowMAX feeders also.

To learn more go to http://hogslat.com/sowmax-feed-dispenser on our web store.