Close
Menu
Show your wishlist 0
You have no items in your shopping cart.
Menu
Search
Wishlist
0
Filters
Personal menu
Hog Slat to Exhibit at the 2015 World Pork Expo

The main objective of this study was to collect lactation and rebreeding data from sows fed with SowMAX self feeders opposed to sows that were hand fed. The secondary objective was to measure the amount of labor required to manage the sows using each type of feeding system, specifically during lactation. Two farrowing rooms were observed in this study. One-half of the farrowing crates in each room were retrofitted with SowMAX feeders. Farrowing occurs every other week at the Swine Educational Unit (n=24 sows per group). At the present time, data has been collected from 36 sows utilizing SowMAX feeders and34 sows that were hand fed.There were significant interactions between season (winter versus summer) and feeding strategy (SowMAX versus hand feeding) for both sow and piglet performance and sows’ daily feed intake patterns. Consequently, the data is presented seasonally. Sow and piglet performance during lactation is shown in Tables 1 and 2, while sow daily feed intake patterns are shown in Figure 1 and 2. Tables 3 and 4  contain sow rebreeding performance and baby piglet death losses, respectively. (see complete article online including tables) There were no significant interactions between seasons and feeding strategy for this data, therefore the means in these tables were averaged across seasons.

Total feed intake and daily feed intake appear to be superior for sows being fed with the SowMAX feeders. This was particularly true during the summer months.

The data in all the Tables are the mean values and the standard errors. The last column in each table is the p value, which is a measure of how different the means is statistically. In a general sense, the p value can be thought of in the following manner. If the experiment was repeated 1000 times, then one would expect the same result as indicated by the p value due to chance. For example, in Table 1 the p-value for total feed intake is 0.043. Sows fed with the SowMAX feeders consumed 17.2 lbs. more feed during lactation compared with those fed by hand. What this means is that there is less than 5% chance that this difference is simply due to chance and random events and a 95% chance that it is due to the SowMAX feeder. Conversely, the body weight of sows after farrowing has a p value of 0.671. What this means is that there is more than 50% chance that the differences observed are, in fact, due to chance or random events and not related to the way they were fed (SowMAX versus Hand Feeding). The p values in bold are those that are less than 0.05 that is considered to be highly significant in the scientific literature. In other words, there is a 95% probability that the current difference is due to the feeding system. The p values in bold italics are ones with p values between 0.05 and 0.20. These are considered important trends in scientific literature. Usually what happens with trends is that as more data is collected (more observations) then their p values move closer to 0.05. 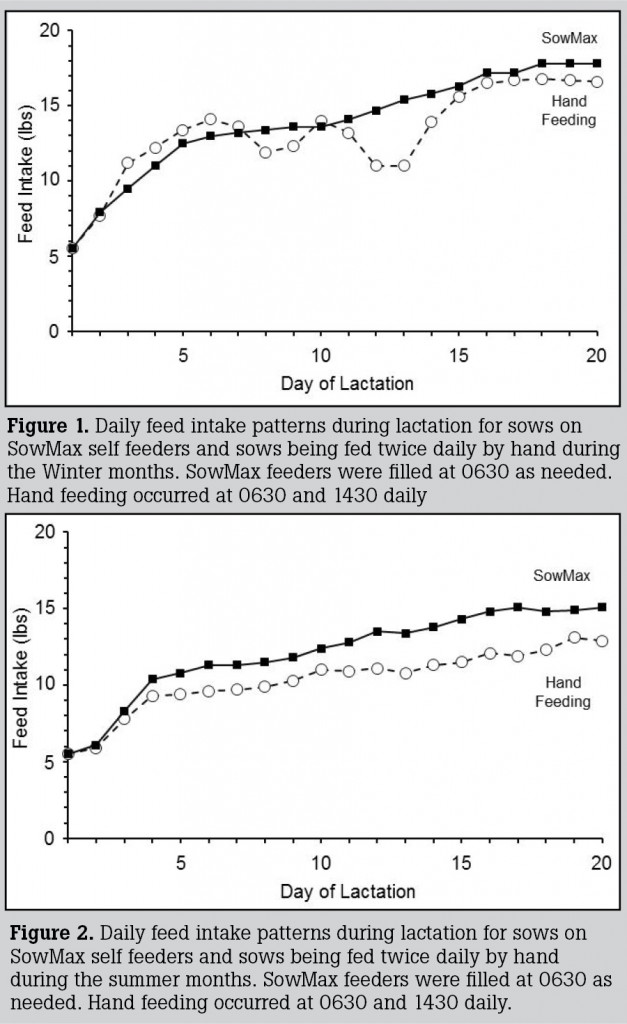 The increased feed intake during lactation resulted in better pre-weaning weight gain by the piglets. There were no differences in piglet mortality or rebreeding performance between treatments. A rather interesting observation was the lower body temperature during the last week in lactation of the sows utilizing the SowMAX feeders. This was even more prominent during the summer months and most likely is the factor responsible for the increased daily feed intake in these sows. This is most likely due to them being able to regulate their feed intake during the day. It has been shown that after consumption of a single large mealthe core body temperature increases, compared to intake of the same amount that is distributed evenly over a longer period of time. It appears the sows actually do regulate their feed intake, at least in part, based on the temperature of the ambient environment.

To obtain a copy of the full report contact us at: webinfo.us@hogslat.com