Close
Menu
Show your wishlist 0
You have no items in your shopping cart.
Menu
Search
Wishlist
0
Filters
Personal menu
Preparing poultry houses for extended out times Use static pressure to monitor tunnel ventilation

Stir fans...know what you're buying. 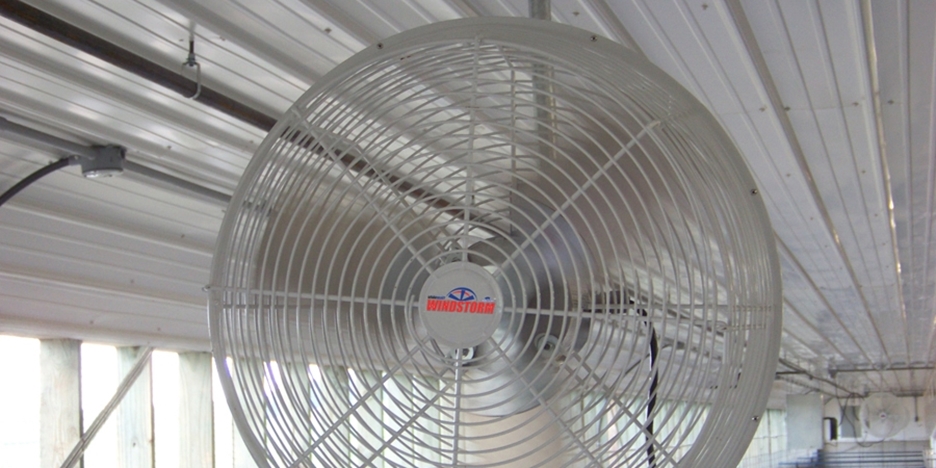 Have you ever noticed the wide difference in the cubic feet per minute ratings between different brands of stir or circulation fans?  A quick online comparison of 18-inch circulation fans shows a range of 6,375, 4,000, 2,200, and 1,770 cfm.

The difference is how the ratings are measured; cfm vs. thrust cfm.

We are accustomed to looking at fan's ratings in cfm at different static pressures. A wind tunnel records the data and provides a useful method to compare fan performance.  This type of cfm measurement is not possible with basket fans designed to operate in free air without static pressure resistance.   There are several methods used to measure stir fan performance.

One method commonly used internationally involves recording the air velocity at a predetermined distance in front of the fan.  A mathematical formula, which includes the total fan area, determines the tested fan's cfm rating.

A second method uses a thrust sled to measure output by recording the pounds of force the fan generates against a load cell feeding data into a computer program.  The calculated rating is expressed as thrust cfms.

Why choose one method over the other?

The thrust cfm method follows the guidelines established by the Air Movement and Control Association to measure stir fans. The AMCA also sets the standard used by most fan manufacturers and BESS Labs to test exhaust fans with a wind tunnel.  Standardized thrust cfm allows buyers to use certified performance when comparing competitive brands of stir or circulation fans.   It also permits a comparison of energy efficiency as thrust cfm/watts, which is not possible using the international method.

The international method is relatively unsophisticated, requiring very little equipment besides a handheld wind meter.  The resulting data will always be higher than the ACMA method, which looks impressive to an uninformed buyer.

Livestock and poultry producers should be critical of performance figures when purchasing circulation or stir fans.  While having an unrated fan to blow air around on your deck isn't a big deal, relying on a fan, with inflated test numbers, in your hog or poultry house is another matter entirely.