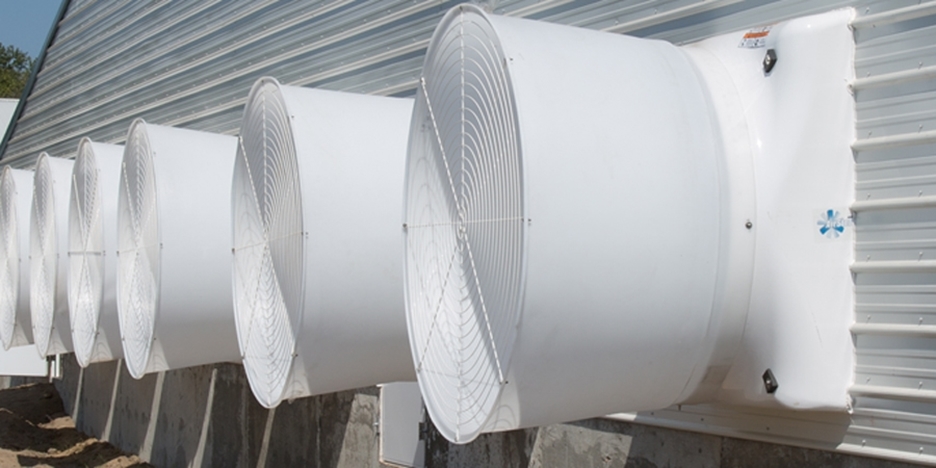 This method is the simplest and most common method for reducing the cubic feet per minute output of fans. A voltage reduction device, called a triac, reduces the amount of voltage to a variable speed motor, slowing the revolutions per minute, which decreases the amount of air moved.  Controlling motor speed by varying voltage has several limitations.

1) Heat buildup.   Even with the voltage reduced, the motor still receives the same amount of power.  The extra power doesn't just disappear but instead converts to heat. The excess heat buildup limits variable speed fans to 40% of their maximum output to prevent burn out.

2) Less efficient. Because of the limits on the low speed, variable-speed fans must be smaller to meet the desired lower CFM rates.  The smaller fans are less efficient by design, and power consumption per watt increases.

3) Fixed output. A strong headwind blowing against a variable-speed fan or increased static pressure will reduce its output.  Triac based controls do not automatically increase the voltage to compensate for the decreased RPMs.

Instead of regulating voltage, a VFD controls speed by sending input frequency or hertz to an inverter rated, three-phase motor.    An external controller receives a signal from the ventilation control and sends the corresponding signal to the motor in hertz.  There are several advantages to VFD fans compared to voltage-regulated fans.

4. Convert existing fans.  Replacing the existing motor with an inverter rated, three-phase motor, and adding an external VFD controller makes the conversion possible for most fans.

A VFD controlled fan does not change the fan speed to compensate for headwinds or increased static pressure.  A strong wind blowing against the fan will decrease its output, much like a voltage-controlled fan.

The integrated electronics, inside an ECM motor, receives a signal from the house controller and determines the desired RPM.  It continues to monitor the shaft RPMs and adjust the power inputs to maintain the correct speed.

1) Precise variable speed output. Upon receiving a signal from the house controller, the motor microprocessor determines the correct speed for the desired ventilation rate. It continues to monitor the shaft RPMs and adjust the power inputs to maintain the right speed.

For example, if a fan's maximum is 700 RPM, and the motor receives a 5-volt signal, it will adjust the power to 350 RPMs. If the RPMs decrease, because of higher static pressure or a headwind, more power is sent to the motor to maintain the desired fan speed.

4) Extended motor life. Infinity motors operate at cooler temperatures than comparable voltage-controlled AC motors, even at slower speeds. High operating temperatures are one of the leading causes of motor failure.