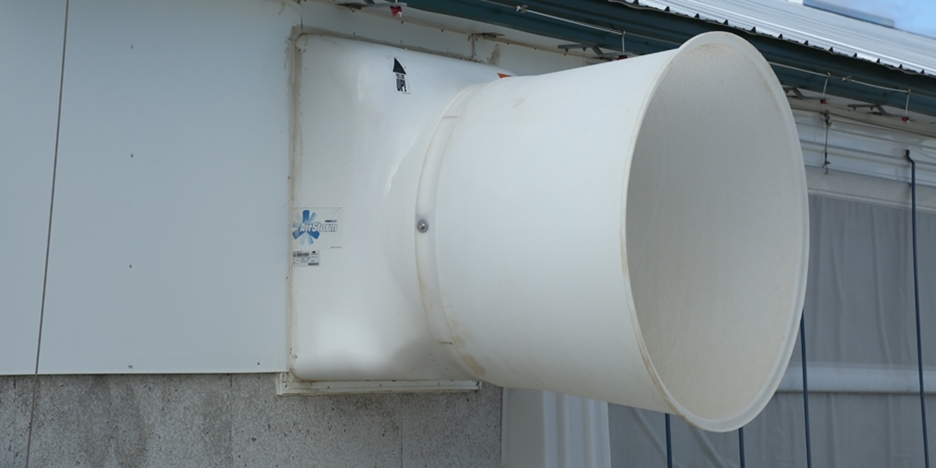 A new control system allows larger fans to be converted to variable speed with improved accuracy and reduced energy consumption.

Most fans used for minimum winter ventilation rates tend to be smaller diameter fans.  It's necessary to use fans with a lower total cubic foot per minute output as the most common method of slowing the fan to reduce air volume is reducing the voltage going to the motor.  It is generally advised not to operate voltage-regulated fans at speeds below 40-50% of their maximum revolutions per minute to prevent the motor from overheating and stalling.

Although smaller fans are effective in delivering the correct minimum rates they do not significantly contribute to the total cfm rate needed to cool the building during maximum ventilation or perform at the highest energy efficiency.

Variable Frequency Drive or VFD system uses a three-phase single-speed motor, and VFD controller.  A VFD controller receives a 0 to 10-volt signal from the house controller and sends a corresponding signal to the fan motor in frequency or hertz.  The full range of a VFD fan varies from full delivery down to nearly zero.  This lower cfm range permits a producer to replace several smaller minimum fans on existing facilities with a single, larger VFD fan also functioning as a tunnel fan in the summer. Varying the hertz to control fan speed has a significant advantage over using voltage including less motor overheating and improved energy efficiency because decreasing frequency also reduces power consumption.

By Austin Baker, Ventilation Director for Hog Slat Inc.  You can contact Austin at jabaker@hogslat.com